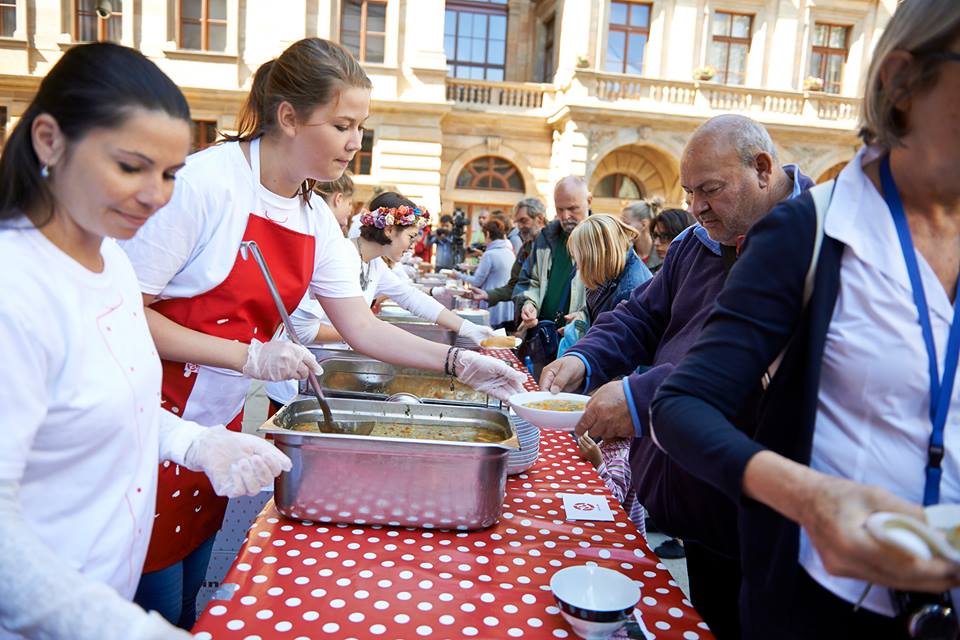 Curved carrots, small potatoes, yellow cauliflowers. "Wonky soup" cooked by the group Save Food was made out of vegetables with imperfect appearance. The happening took place on September 5 by National Theater in Prague and we cooked from the ingredients which would never made their way to family tables cause they are considered unattractive for the supermarkets.

Not only we gave away all 2 000 portions of potato soup, minestrone and Indian soup, but we also achieved our main goal: to inform the public about tons of quality food staying in the fields unharvested, because their appearance is not considered satisfactory for the Customer.

In the course of two days those aesthetically imperfect vegetables were harvested and cut with the help of our volunteers. For instance, there was 60 kg of onions, 40 kg of carrots, 30 kg of potatoes, 12 kg of garlic and 30 kg of cauliflowers to cut. 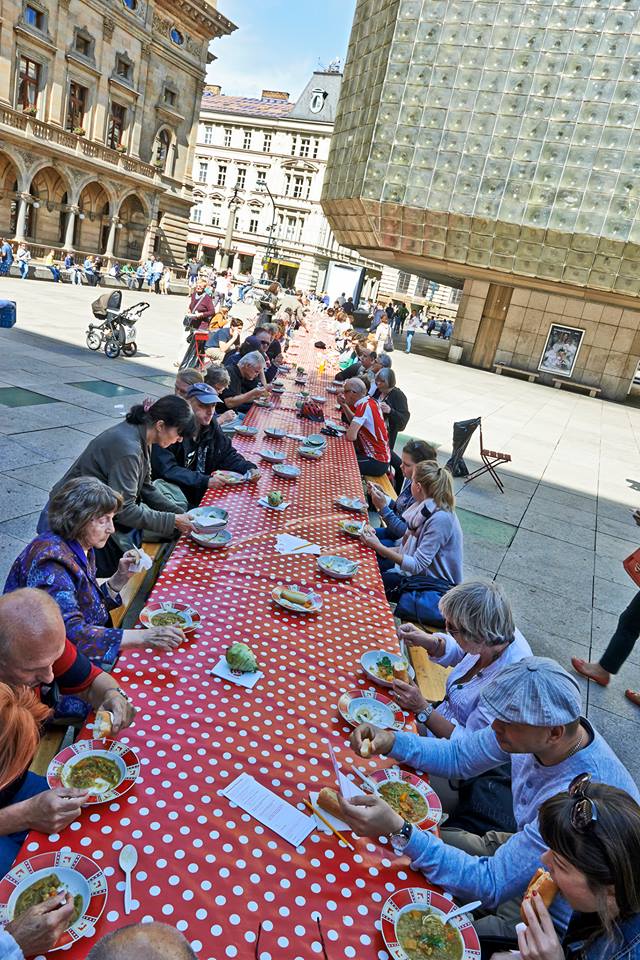 What was happening before Wonky Soup and why did we organize it?

Save Food started to go to the fields in 2015. During the project called „Gleaning“ we found out, that huge amount of fruits and vegetables never gets eaten and ends up as agricultural waste. We managed to gather 6 tons of vegetables thanks to volunteer work of approximately 80 people. This food was passed on to the food bank for free. And why did we organized the Wonky Soup happening? We did it to draw the public attention to the excessive amounts of unused vegetables.

Save Food also wanted to stress the fact that the energy needed to grow those „unwanted“ vegetables and fruits should not be squandered and that it is possible to treat the yield more meaningfully: e. g. to sell it for lower price or to donate it to the people who don‘t have money to buy it through food bank. The happening was co-organized by British partner organization Feedback, which has plenty of experience with gleaning and organizing public feasts. 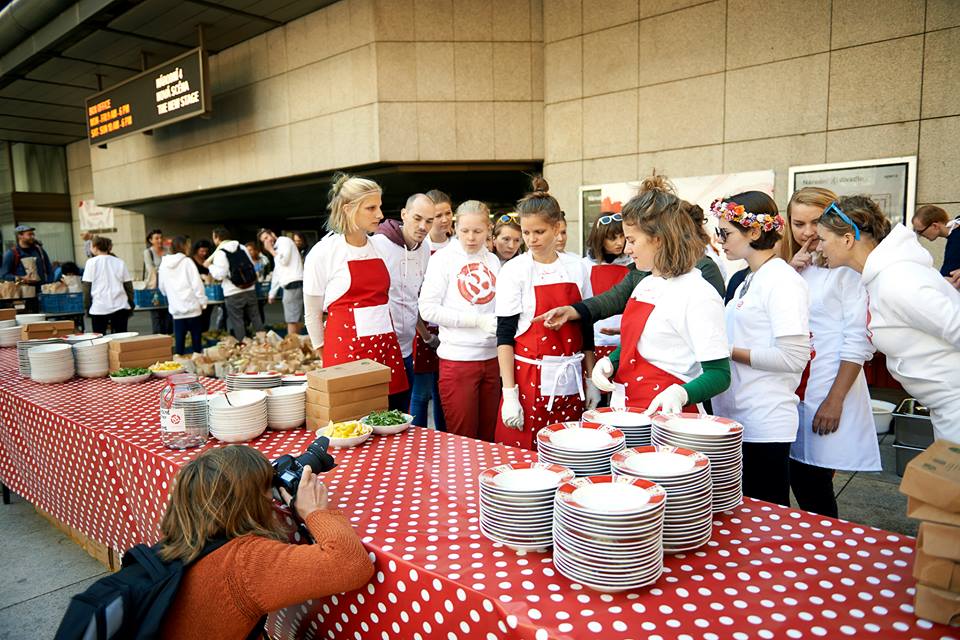 Organization Save Food which organized „Wonky Soup“ has operated in the Czech Republic already for two and a half year. First public event of the initiative was „Feeding the 1 000“. Happening took place on September 10, 2013. We prepared common open-air lunch at Wenceslas Square and cooked the meals from more than 450 kg of ingredients which would be otherwise wasted because of aesthetical demands or their upcoming best-before date. We wanted to point out, that each of us can prevent food wasting.

Another important happening was Thousand Kilos. Its goal was to call attention to wastage in the agriculture and to the possibility of donating surpluses to food banks. People could get full sachets of potatoes, carrots or onions for symbolical price. Two and a half tons of vegetables were donated by Czech farmers with fields near Prague. 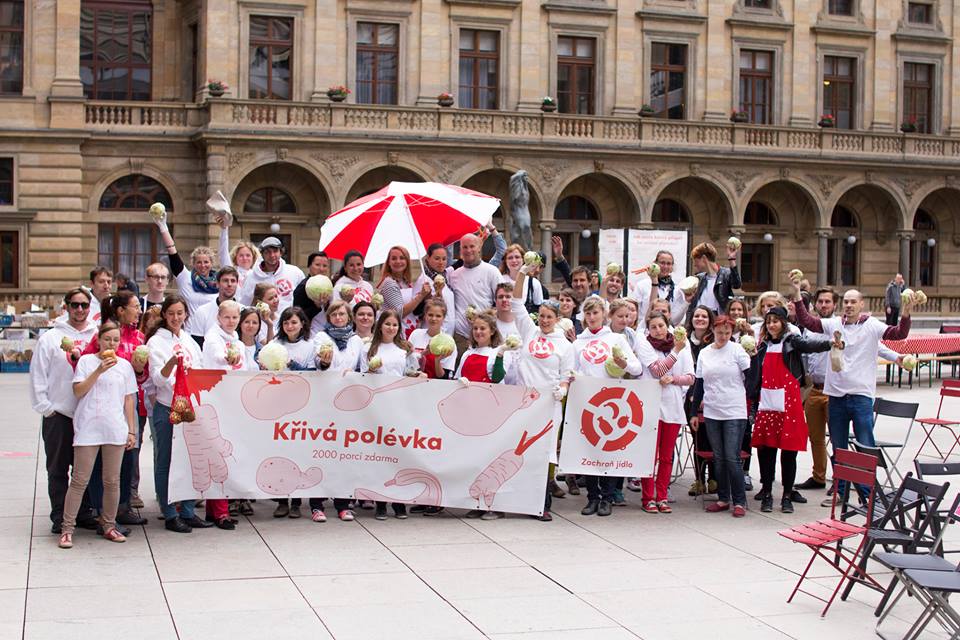