Boroume, which means “we can” in Greek, is a non-profit organization committed to reducing food waste and the distribution of surplus food for charity throughout Greece. Since its beginning in 2011 more than 2 million meals of surplus food have been donated to welfare organizations.
Boroume is a communication hub between food donors and welfare organizations (welfare institutions, soup-kitchens, municipal social services) that creates “bridges” between those who have surplus food and wish to donate it and those who need it.
In the four years of its operation, Boroume has created thousands of such “bridges”, often of permanent nature, and today offers on average more than 3.000 portions of food per day through its network.
Through its innovative model of utilizing food that otherwise would end in the garbage, its educational program and its awareness campaigns, Boroume aims at creating a social movement against food waste.
http://www.boroume.gr/ 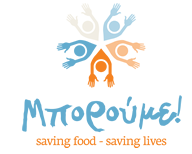