Some of the actions included:reinforcing the strict labeling system, scrutiny of quality and temperature at receiving, increasing the number of deliveries, and staff awareness-raising campaigns at canteen, even among staff not working with food.Tighter portion control on the buffet were also implemented, together with additional live cooking stations and more food prepared on demand.Chefs and kitchen staff got guided to found creative opportunities for re-using food which had previously been thrown away.

“Within 5 to 10 years, most major hotel chains will understand the true cost of food wastage and will be controlling their #foodwaste much more carefully”, predicts Benjamin Lephilibert, Founder and MD of LightBlue E.C.

Find out more about the initiative and its actions here

The Second International Conference on Global Food Security will take place on 11-14 October 2015. The conference aims to deliver state-of-the-art analysis, inspiring visions and innovative research methods arising from research in any of a wide range of disciplines.

Join this exciting opportunity to ensure that the best science is garnered to support the emergence of the Sustainable Development Goals. Oral and poster abstracts are now invited on the following topics and should be submitted using the online abstract submission system.

Successfully submitted abstracts will be acknowledged with an electronic receipt including an abstract reference number, which should be quoted in all correspondence. Allow at least 2 hours for your receipt to be returned to you.

In 2013, the event fed over 6,000 people. United Against Food Waste is a part of the Nordic event series, which in 2014 was held in Finland, Iceland, Sweden, Norway and Denmark. See more at: Unitedagainstfoodwastenordic

Read more about the event here

Videos presenting FUSIONS feasibility studies are available on our website!

Find out more about these studies and discover how social innovation can help reduce food waste.

From transforming surplus fruits and vegetables into jams, chutneys and puree to the sound of music, to easing the process of food donation or setting up a social supermarket selling food that would have otherwise been wasted at reduced prices, you can now watch the leaders of these feasibility studies explaining in details their initiative fighting food waste here : http://www.eu-fusions.org/social-innovations, under the tab “more information”.

Ugly fruit in stores near you! 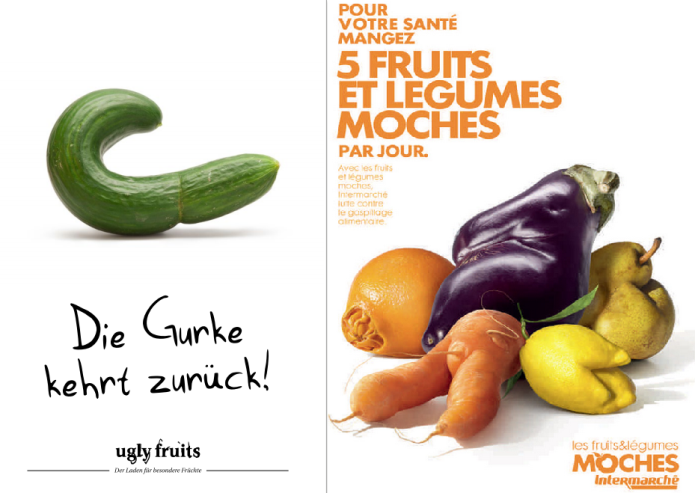 Ugly fruit has taken Europe by storm. The rejection of fruit and vegetables for sale based on appearance impacts food waste across the supply chain, as perfectly good and edible produce remains uneaten. However, since the EU revised certain rules regarding the appearance of fruits and vegetables in 2008, a movement towards consuming “ugly” fruits and vegetables has been gathering momentum. Several recent campaigns and initiatives across the EU demonstrate approaches to integrating misshapen produce into consumers’ diets. Sainsbury’s supermarket in the UK was an early mover, promoting the irregular crop produced by UK farmers in the difficult growing season of 2012, from a solidarity perspective.

Having become viral on social media, the French supermarket Intermarché’s campaign to sell “fruits et legumes moches ” (inglorious fruits and vegetables) is one of the better-known examples of this growing phenomenon. Intermarché purchased from its growers produce usually discarded due to imperfections and put the food on display with its own label at a 30% discount. To raise awareness about food waste and prove that “ugly” produce is just as delicious as traditional-looking produce, Intermarché offered free fruit juices and soups in-store, as well as developing engaging videos to sensitize consumers.

Two other French supermarkets have since joined the movement with a “Quoi ma gueule ?” (“So what about my look?”) label, also selling “imperfect” produce at a 20 to 30% discount . Leclerc supermarket is commercialising “soup kits” of ugly vegetables, with the right quantities and recipes for soup. There is still scope to expand on this concept via juices and smoothie bars.

In Germany, Culinary Misfits bases its cooking classes, meals, and catering services on using misshapen and forgotten varieties of produce, and envisions opening up small grocery stores where only “ugly” produce is sold. Furthermore, the Ugly Fruits campaign, also in Germany, pairs misshapen fruits and vegetables with suggestive slogans in order to encourage people to eat untraditional-looking produce.

In a different approach, Fruta Feia, which means ’ugly fruit’ in Portuguese, recovers unsold produce from local farmers for half the price that big supermarkets pay for “perfect” items, and then sells it to their registered custumers.

While some supermarkets in the UK have also started to sell blemished or misshapen fruit, the Dorset County Show has gone even further by adding a new “ugly fruit and vegetable” category to their horticulture competition, stating that there are no rules other than visual non-conformity, the more extreme the better .

All these campaigns have led to an increase in “ugly” fruits and vegetables being eaten, and have simultaneously helped increase awareness on the issue of food waste in general. The campaigns demonstrate that approaches to making less aesthetic fruits and vegetables more mainstream can take various forms. Consumers have overwhelmingly embraced these initiatives, suggesting that contrary to the perception that rigorous aesthetic standards in supermarkets are demand-driven, there is a real desire to accept nature’s bounty as it occurs.